Þingvellir National Park: A Walk between Continents and Through Icelandic History

One of the most visited attractions in Iceland, Þingvellir (Thingvellir) National Park boasts of interesting landscapes and its huge historical, cultural, and geological significance. It is at this point that the Eurasian and North American tectonic plates meet and create a rugged rift valley that runs through the sight. This extraordinary geological site is a marvel to look at as you can see the two plates drifting apart. Þingvellir is also integral to Icelandic history as it was the first national park of the land, and it was here that Icelanders declared independence from Denmark. The exquisite valley has been declared a World Heritage Site by UNESCO owing to its cultural and patriotic value.

Tours that will take you to Þingvellir National Park

The national park is regarded as a place for cultural heritage and national identity which has been an incredible stepping stone in Icelandic history. Established as an open-air assembly point for Alþingi, the democratic legislative assembly of the Viking Age Commonwealth, Þingvellir was where the assembly met and set laws for the country from 930 to 1798. In a deeply symbolic act, the parliament declared Þingvellir as a national park in 1930, marking the 1000th anniversary of the foundation of Alþingi. Later, this cultural park played a central role in Iceland’s independence struggle from Denmark. When Iceland was declared a republic in 1944, it was done on these grounds.

Þingvellir was also the cultural center of the great lands. During the commonwealth period, thousands of people flocked to these grounds from all over the country. Merchants, sword sharpeners, and tanner would sell their services, and ale-makers would keep everyone’s spirits high. It was the site of the very first cultural festivals in Iceland with games and feasts being held for two weeks. Safe to say, Þingvellir has been an important symbol of national unity from time immemorial. 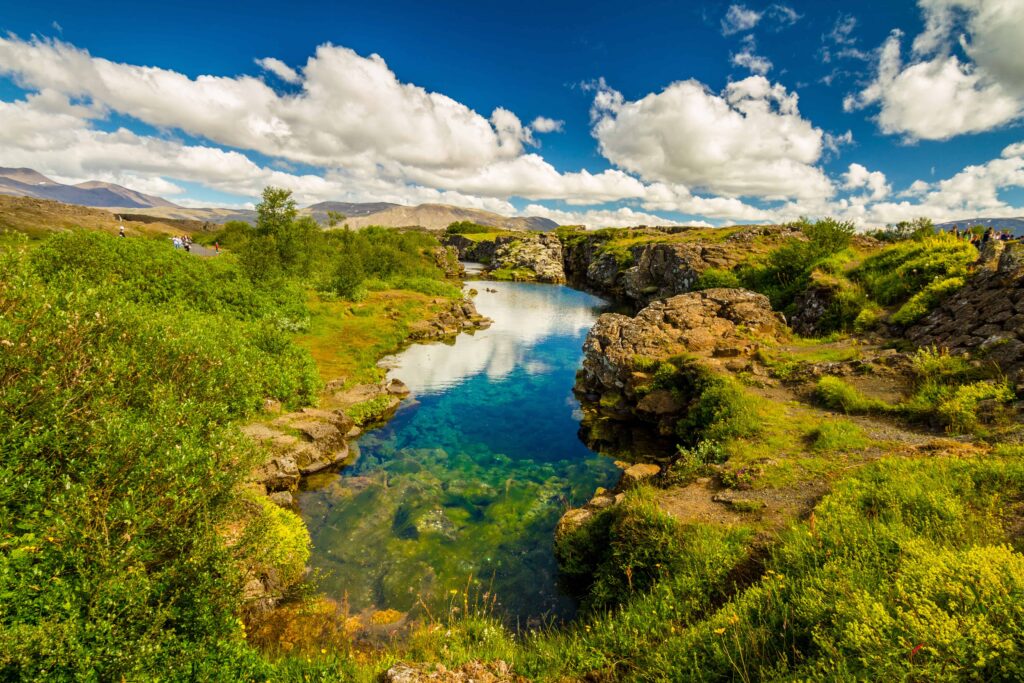 The unique geological composition of Þingvellir National Park is every bit as remarkable as its great history. It is in Þingvellir where Iceland is divided by the Mid-Atlantic Rift. This rift valley was created by the drifting apart of the North American and Eurasian tectonic plates. The plate boundaries can be seen as about 10-11 thousand years ago, great volcanic eruptions happened in this area. The Almannagjá gorge is crack in the thrift valley and is a pathway that separates the two continental plates. You can walk alongside both sides of the plate. 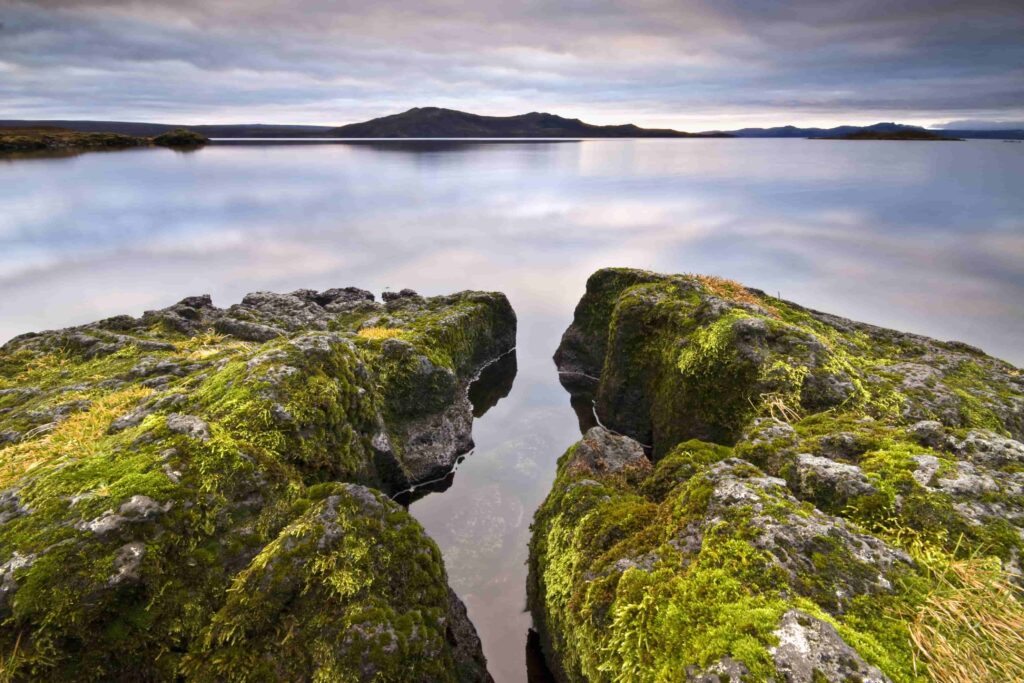 In winters, the valley offers a great view with the Northern Lights shining bright in the sky and snow covering the lave fields. You can see the lake Thingvallavatn, the largest natural lake in Iceland – south of the national park. Tourists often go snorkeling or fishing in the lake. It is a spectacular dive site where you can swim between continent plates in the clear, glacial water. The Almannagjá gorge path ends with the charming Öxaráfoss waterfall.

Other fascinating spots to see at the Þingvellir National Park include the Drekkingarhylur pond, a beautiful stream with a tragic history, Peningagjá pond – stream for throwing coins for good fortune, Þingvellir Church and the Þingvellir Hiking Trails. 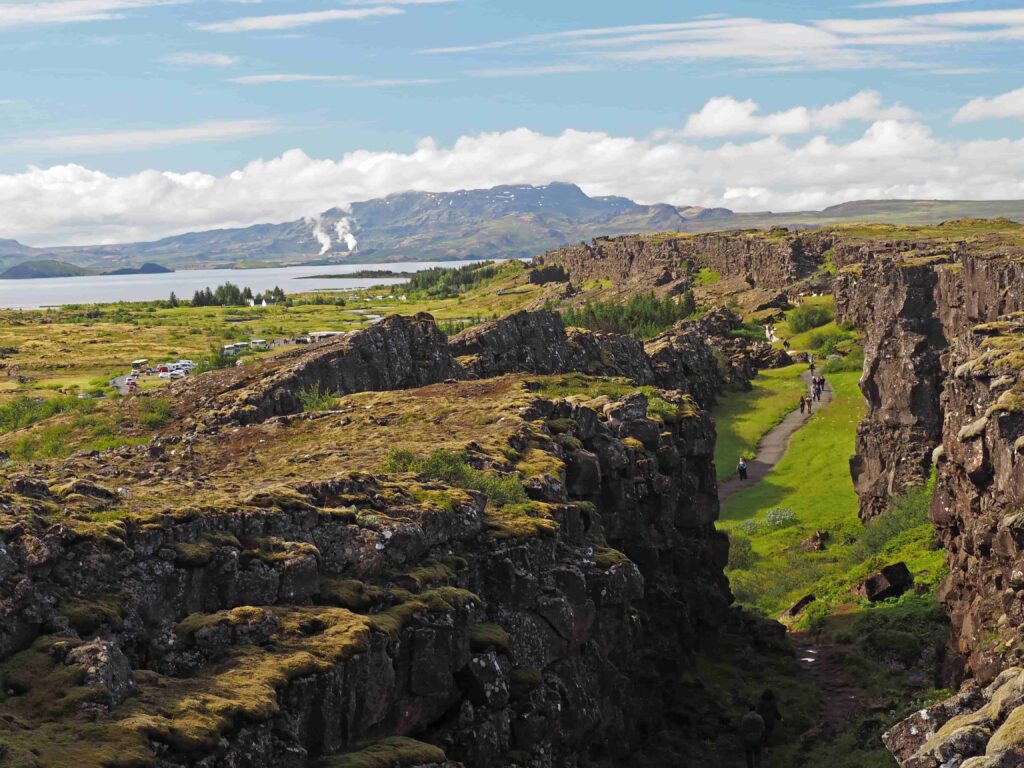 How to Get There

Þingvellir National Park is part of the famous Golden Circle, along with Geysir and Gullfloss waterfall. Þingvellir is located about 45 km northeast of Reykjavik. Drive on the ring road north of Reykjavik, pass the town Mosfellsbaer and then take the first exit to the right at a roundabout on to road 36 to find yourself at the national park. Alternatively, if you are travelling from Borgarnes, take the shortest route along Highway 1 and then the road numbered 52.

More Tours that will take you to Þingvellir National Park