Lakagígar Craters | Explore the Gigantic Craters in the Highlands of Iceland

Iceland is a leading travel destination that is like a magnet to travel enthusiasts, environmentalists, globetrotters, and solo travelers. The most mesmerizing destination that lets you witness nature’s weird yet so fascinating phenomenon, exceptionally beautiful landscapes of the Icelandic highlands, cascading streams, crystal ice caves, glaciers, volcanic sites and not to forget the infinite waterfalls spread all across Iceland. All this is enough to justify its name “the Land of Fire and Ice”. Now amidst all this, there is one place that is sure to leave you awestruck and make you feel hypnotized by its beauty. It is the Lakagígar Craters – a stretch with massive volcanic craters. Let’s find out more about this magnificent place. 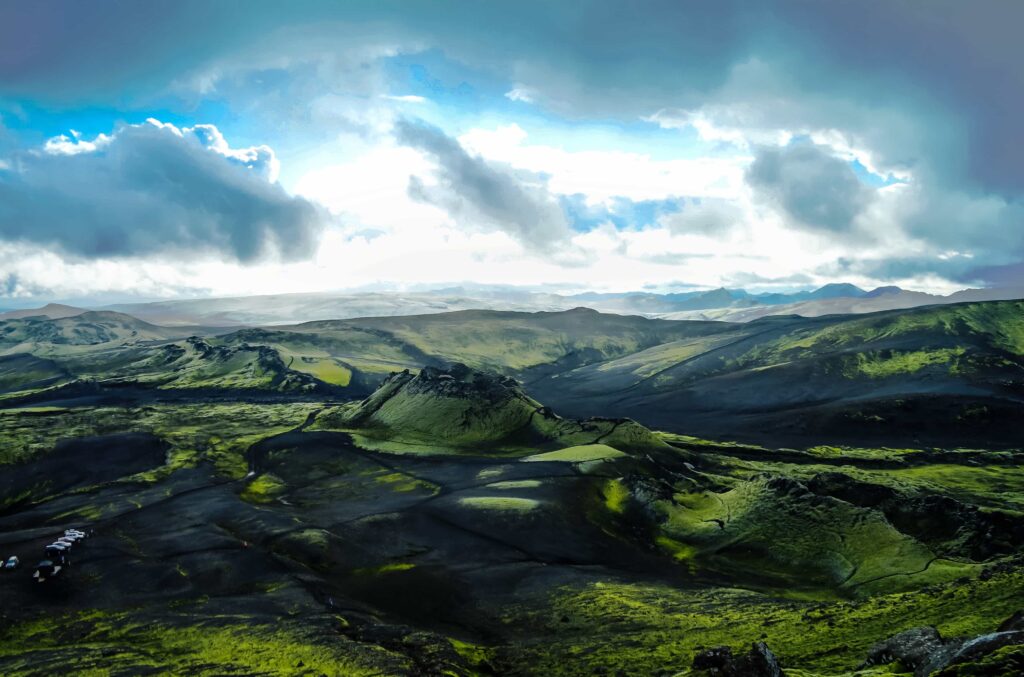 Craters of Lakí: A 25 Kilometer Stretch with Craters!

Adore the gigantic craters and learn more about the devastating history behind them. Yes, Lakagígar in the highlands of Iceland, showcases the craters spread across a massive area. This is a 25 – 27 kilometer stretch that has rows of stunning craters. Lakagígar, or often known as Laki Craters, is an eruptive fissure that has nearly 130 craters that are believed to form during the 1784 volcanic eruption. This damaging eruption was recorded in Icelandic history and it was indeed an exceptionally big one; then onwards the landscape changed completely. Most of the craters are now seen completely or partially covered in moss that creates a scenic view and looks magnificent. It is incredibly vast and occupies a major area.

The formation of these massive craters took place during the eruptions of Laki in 1784. It was not just one of the consequential events in history but it had a global impact as well! It was not just about the formation of the craters, but the dense ash cloud that was produced by it made to halt all the trader routes, which were around Europe, agriculture becomes difficult owing to the poisonous substances that entered soil and crops via rain. Everything was affected by the eruption. It was a combination of thunderous explosions, a strong and pungent smell of sulfur, dense ash clouds, and landslides. It wasn’t limited to an area; the continent witnessed the destruction that was caused due to the eruption. And this is why the craters are spread across an area of 25-27 kilometers. 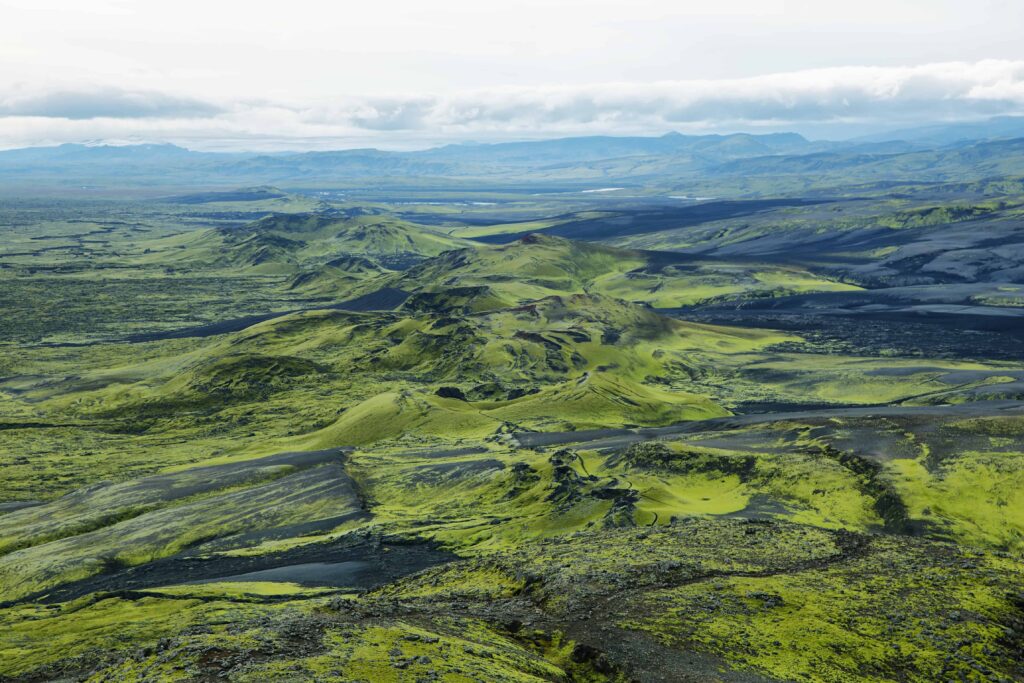 Getting to Laki Craters

If you wish to visit Lakagígar Craters, then, the nearest town that you can stopover at is Kirkjubæjarklaustur, which is located on Route 1. Laki is approximately 45-50 kilometers from there. In between, you will come across many rivers and massive lands till you reach your destination. This means that it is going to be a long and hard drive so it is highly recommended that you book a guided tour for this activity. If you decide to go on a self driving trip to Lakagígar, stocking up on gas and food is recommended for the 45-kilometer-long round trip. Needless to say, if you are fan of driving around in the most rugged parts of nature then this could be one of the best experiences that you will have in Iceland on your trip. 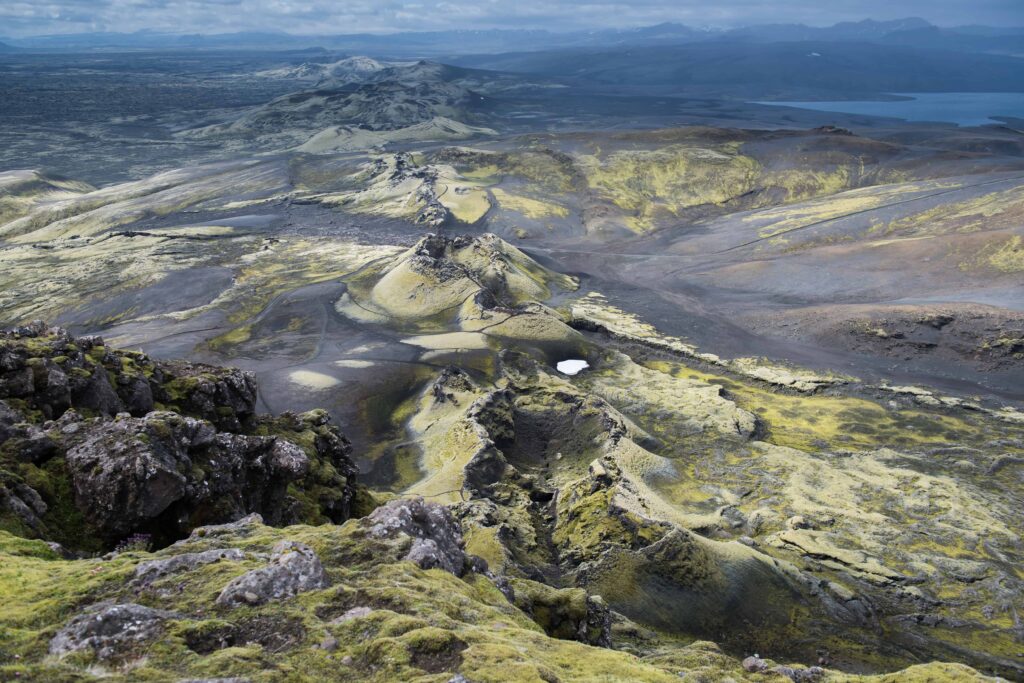 Lakagígar craters on a map 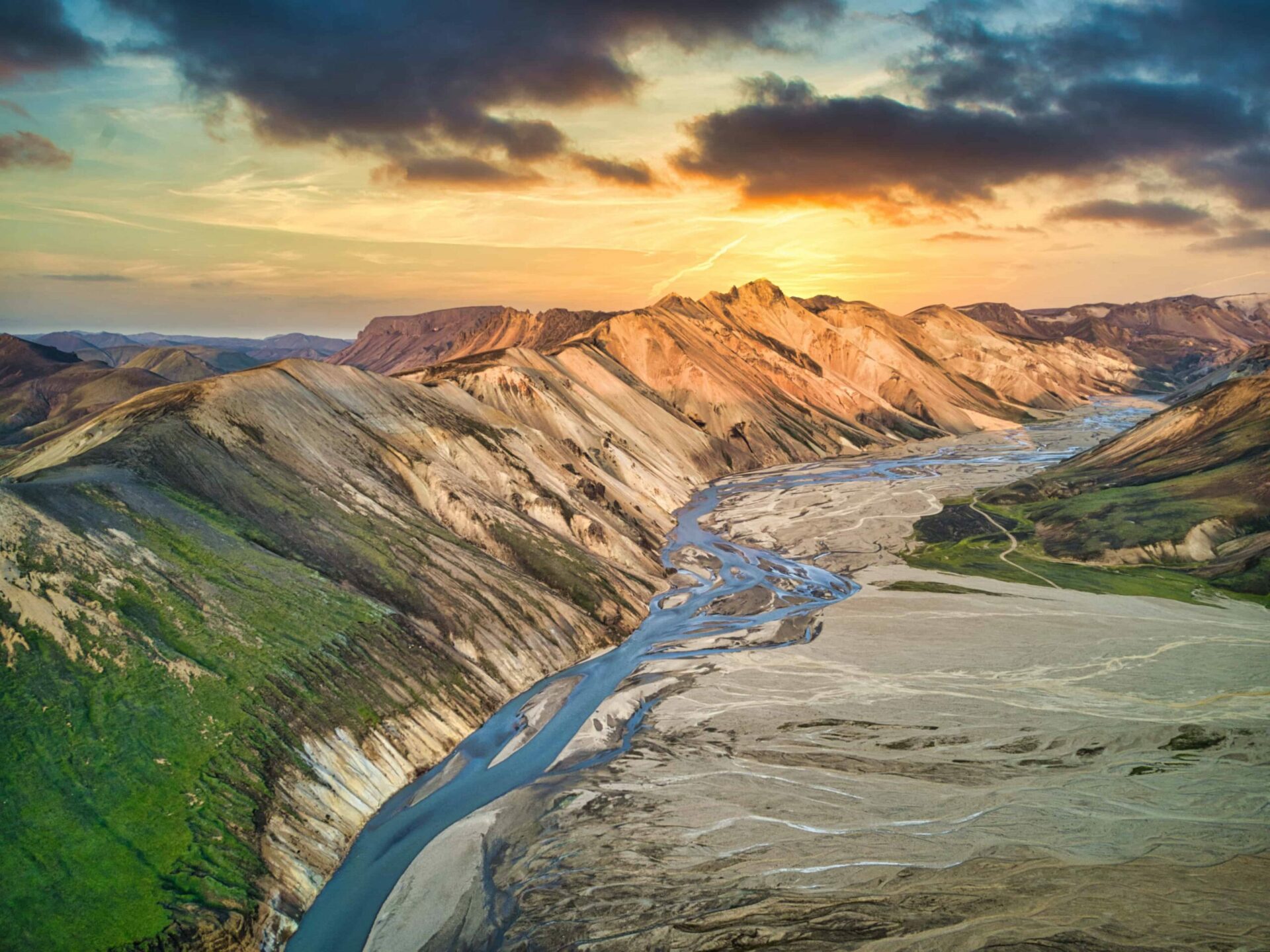 Landmannalaugar: The Most Scenic and Colorful Mountains in the Icelandic Highlands 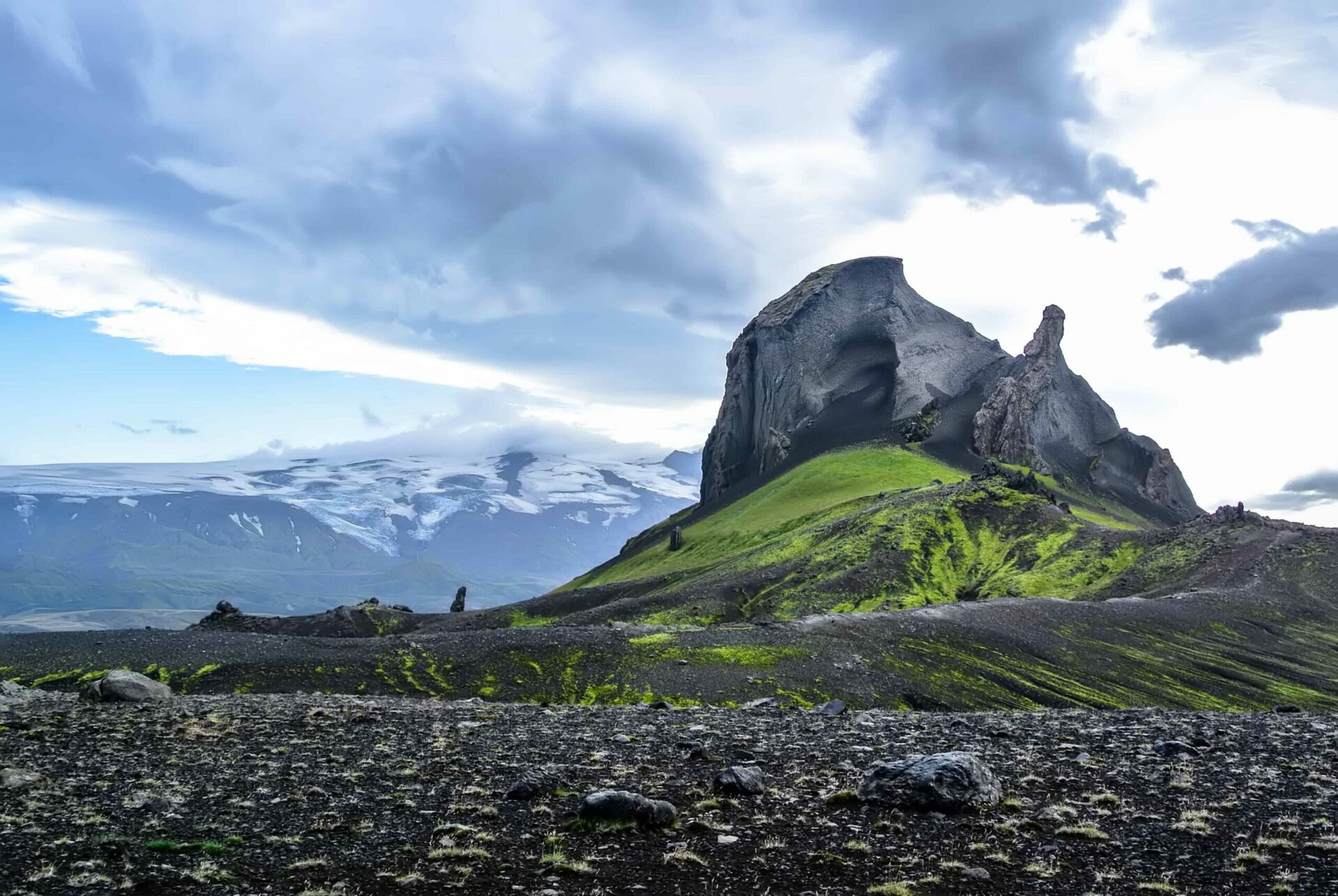 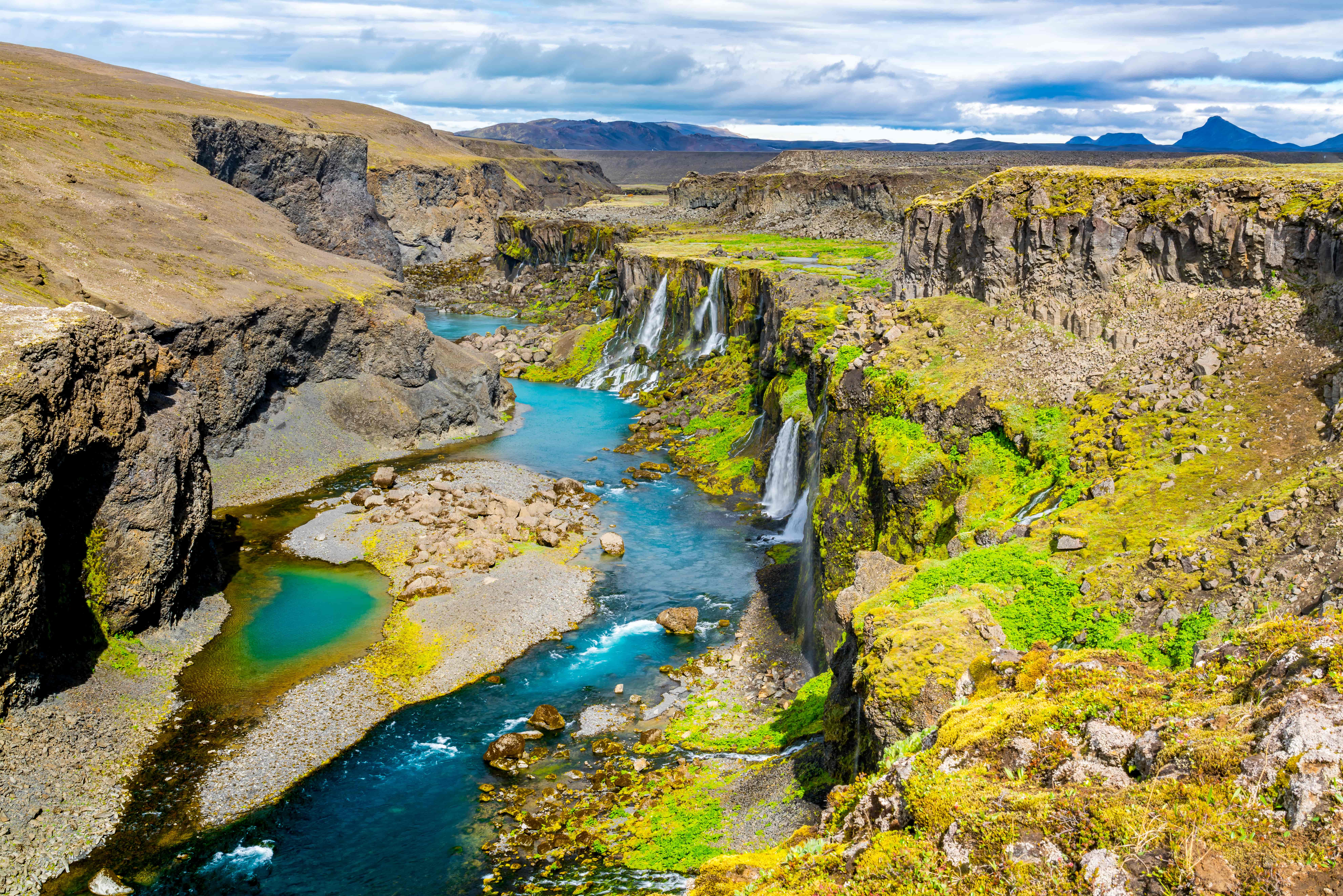 Sigöldugljúfur Canyon | An Energizing Trip to the Highlands