A layer of grass spilled atop the church provides a beautiful landscape view. Located in the Öræfi region in South-East Iceland, Hofskirkja church is one of the many majestic turf churches of Iceland. The burial mounds masked beneath the surrounding grass seem to sneak through the surface. Only six turf churches are left in Iceland. Hofskirkja is the last of the old churches built in traditional turf style. After the original construction in 1884, Hofskirkja was restored in the 1950s by the National Museum of Iceland. It was deconsecrated in 1954. There has always been a church at this site, Hof in Öræfi, for 700 years. The oldest known written records of a church being established on this site are from a cartulary, a medieval document from 1343. The church is made of timber structure surrounded by stone walls while the roof is made of stone slabs, giving it a robust structure that is standing still for centuries. The stone slabs draped in a cloak of greenery prevent the heat from escaping into the cold air of the mountainous landscape. Unlike other churches of Iceland, Hofskirkja is still a practicing parish. 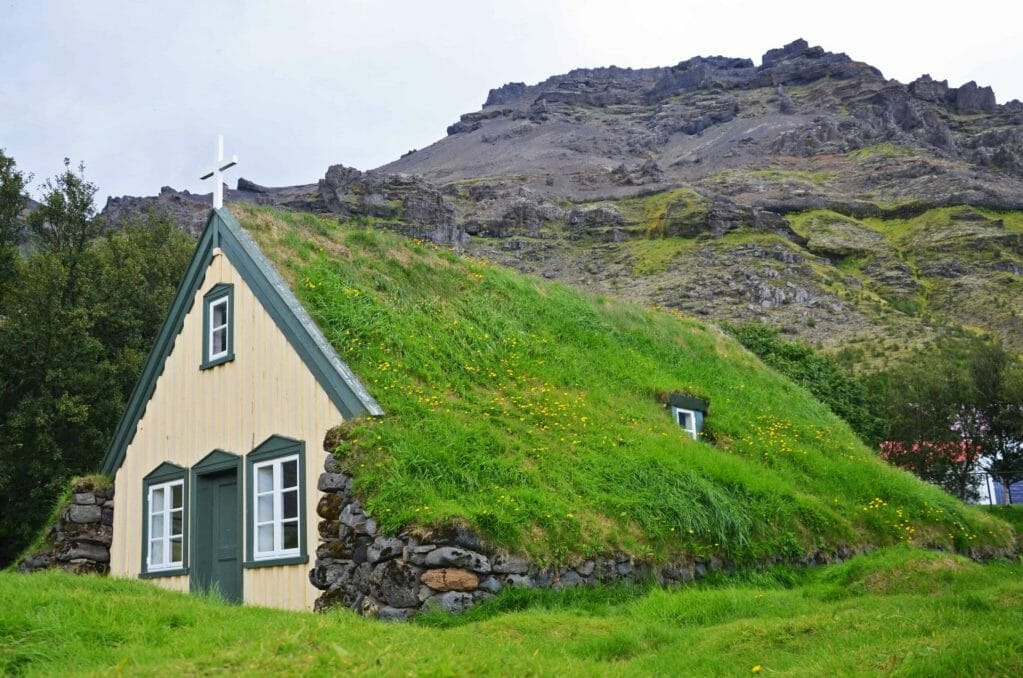 Structure of the Turf Church

Hofskirkja is partially buried into the ground, making the earth to act as insulation. When viewed from the backside, this church looks like a building sinking into the lumpy terrain. The turf structures like this church peppered Iceland villages in ancient times.  The use of grass and dust to protect structures from winters was a common practice. From inside, the church is painted in vibrant colors. This beautiful building is divided into nave and choir; these two parts are separated by a chancel screen. In the upper part of the choir gable and front gable, you will get to see the timber. Hofskirkja Church was built by Páll Pálsson, a famous Icelandic carpenter. Among antique objects in the church, there are Danish tin candle-lights. It was dedicated to St. Clement when Iceland used to be a Catholic country.

The turf houses were the new style of architecture at end of the 18th Century. Since this turf church style was abandoned, timber churches were built in Iceland and then concrete churches. Due to the turf construction, these structures are delicate and fragile. This is why most of the places are now closed to the public. The maker of lock, hinges, and other hardware was a blacksmith from Hof, called Þorsteinn Gissurarson. He was a renowned blacksmith who was known as a “tool” because of his profession. There is a water tub just outside the walls of the cemetery in the south. Creeks from Mt. Hofsfjall were used to generate electricity in this turf church. It is now a part of the National Museum’s Historic Buildings Collection.

While exploring this area, you can visit Skaftafell Nature Reserve, Jökulsárlón glacial lagoon and the Diamond Beach that are 38 kilometers away.

More Locations on the South Coast

Discover more locations in this area: 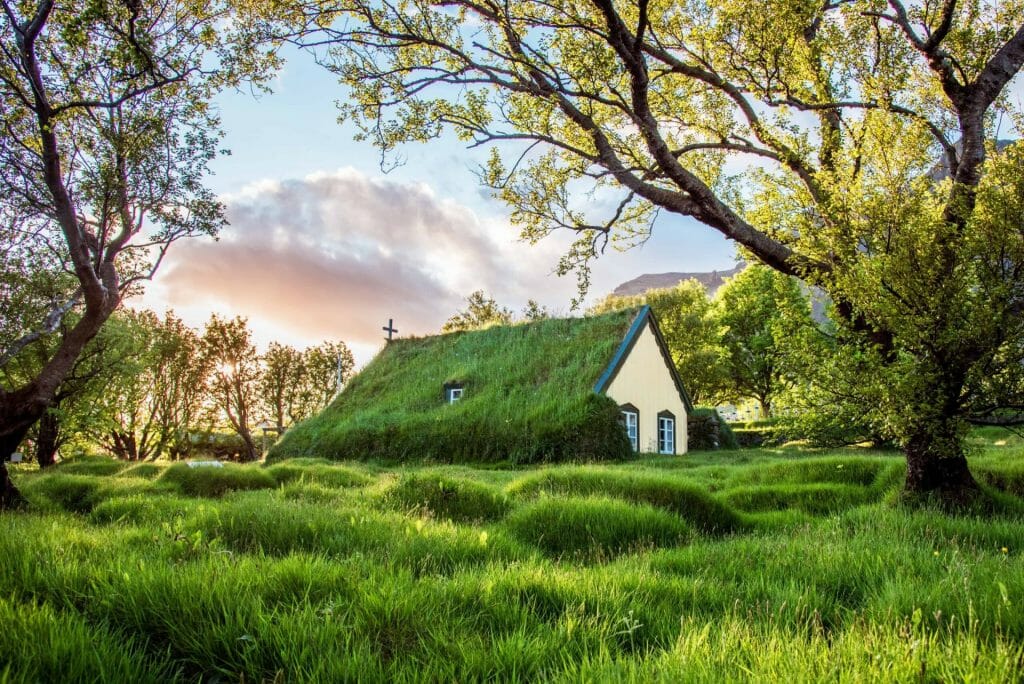 How to Reach Hofskirkja Church

Located at a distance of 342 kilometers from the capital city of Iceland, this church can be easily reached. The ring road 1 was not opened until 1974 when the rivers on Skeiðarársandur plains were bridged. Before 1974, the farm at Hof was completely isolated. Now it is easily accessible by the ring road. Hofskirkja turf church is located in the vicinity of Vatnajökull glacier, around 20 kilometers south-east of the Skaftafell Nature Reserve area in Vatnajökull National Park. Since the church is not open to tourists, the graveyard surrounding this church can be visited. To reach this area, you can either rent a car in Reykjavík Keflavik. Hofskirkja is located at a distance of about 87 kilometers east of the village Kirkjubæjarklaustur.

If you are starting from Reykjavík, drive towards the east on Ring Road 1. While driving on this route, you will cross Selfoss, Hella, Hvolsvöllur, and Vik. Keep driving on the ring road. After a long journey of around 4 hours and 10 minutes, you will reach Hofskirkja. 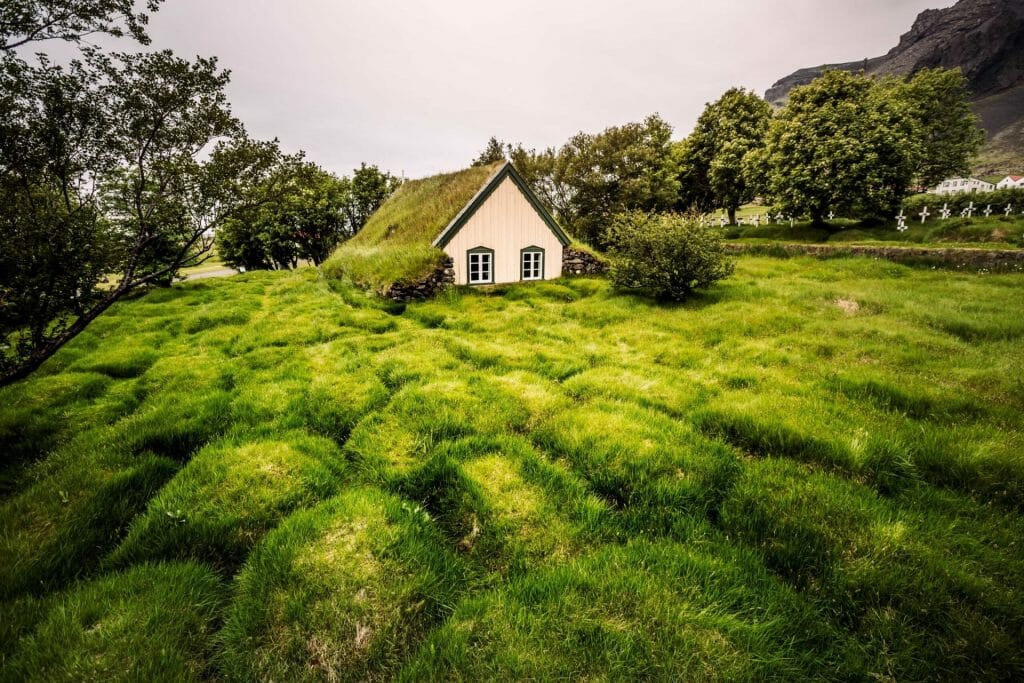 Hofskirkja Turf Church on a map 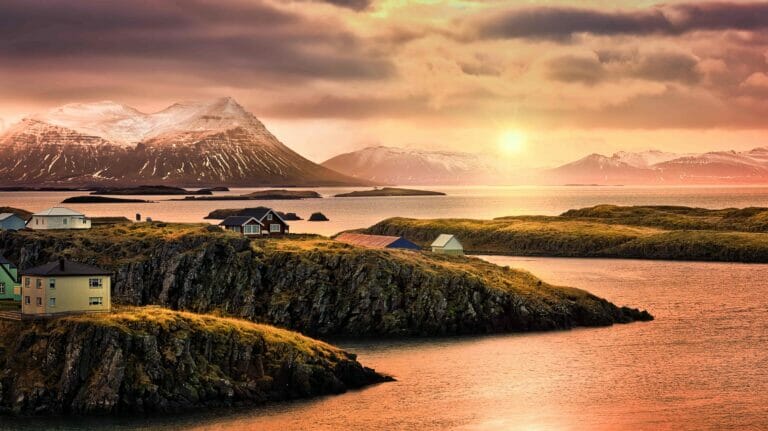 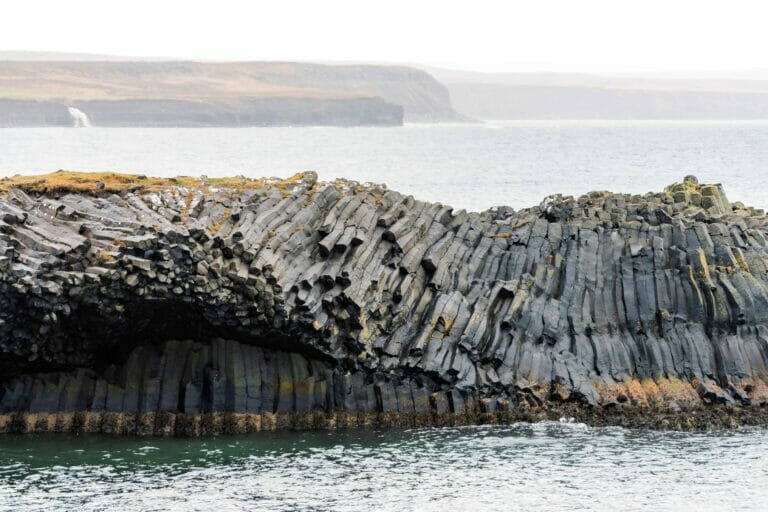